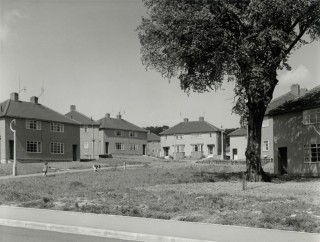 Development of the first garden city at Letchworth, Hertfordshire, planned and designed by architects Parker and Unwin.  Richard Parker was born in Chesterfield in 1867, son of a bank manager, and lived in New Square as a child. Raymond Unwin worked as an engineer at Staveley Works.  He married Richard Parker’s sister Ethel; Parker and Unwin formed an architectural partnership with the aim of improving housing conditions for the working classes.  They were part of the Garden City movement, and had a great influence on the building of social housing in the twentieth century.